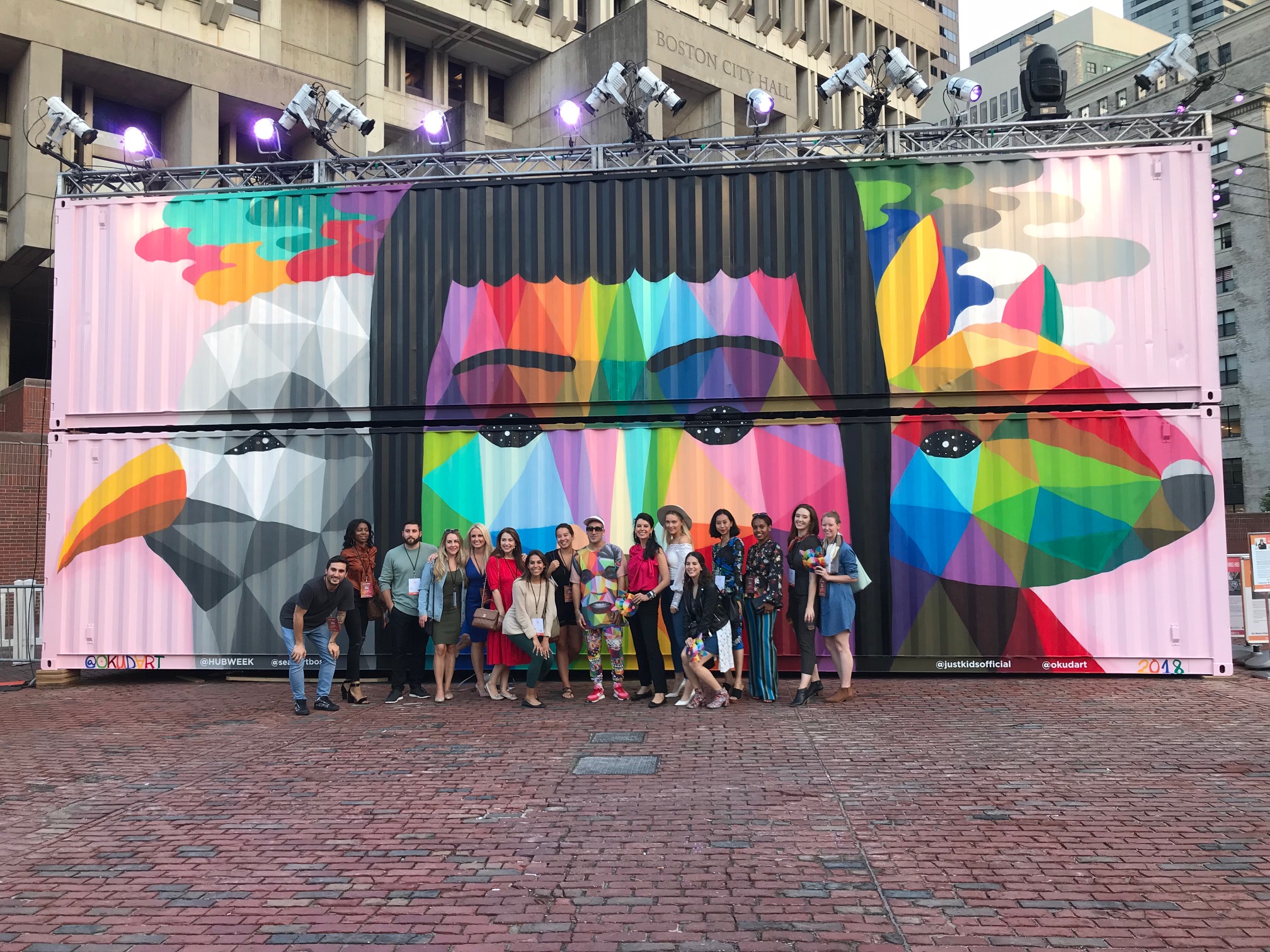 Mermaids and Other Magical Creatures

OKUDA SAN MIGUEL’s unique iconographic language of multicolored geometric structures and patterns on the streets, railroads and abandoned factories around the globe has made him one of the world’s most recognizable street artists of today. Rainbow geometric architectures blend with organic shapes, bodies without identity, headless animals and symbols that encourage reflection in artistic pieces that could be categorized as Pop Surrealism with a clear essence of street forms. His works often raise questions about existentialism, the universe, the infinite, and the meaning of life.

Okuda’s HUBweek mural speaks to the relationship between humans and animals, and to themes of respect, diversity, and harmony among beings and with our environment. The artist’s works can be seen in streets and galleries around the world: Brazil, Chile, India, Japan, Mali, Mozambique, Mexico, Peru, South Africa, United States, and throughout the European continent. Seaport proudly presents new works by Okuda San Miguel during HUBweek and in Seaport. 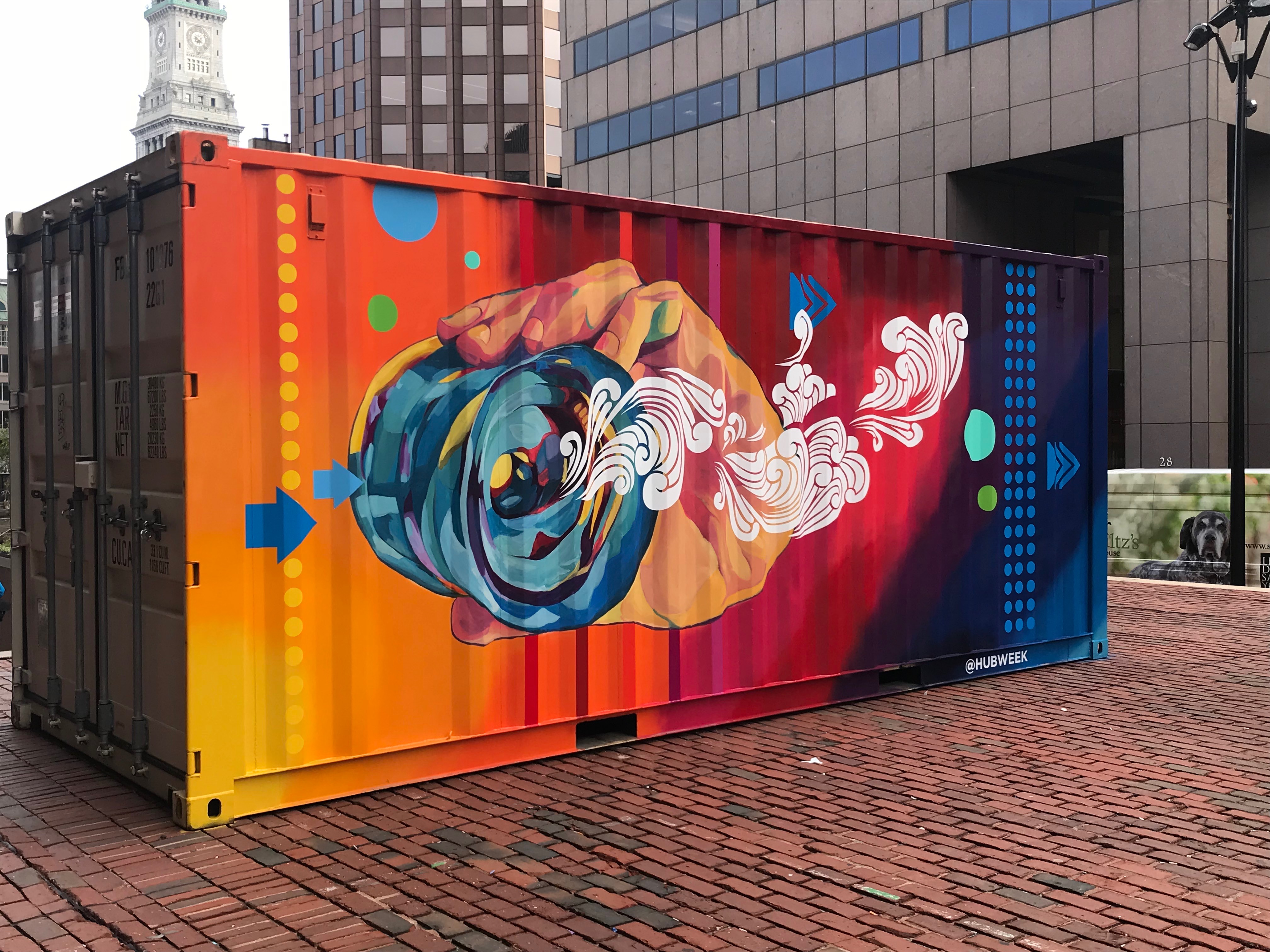 Silvia Lopez Chavez is an artist and designer focused on public art and social activism, who is motivated by the power of the creative process as an agent for positive change. Her work investigates our basic human need to connect with each other on multiple levels: socially, environmentally and culturally. She explores the intellectual and emotional narratives of joy, struggle, acceptance and assimilation, as well as, the change and growth that affect daily life. Chavez has a multi-layered process that includes experimenting with medium, color, line, repetition and form while finding balance between representational and the abstract.

With roots in the Dominican Republic, Lopez Chavez has based her artistic practice in the Boston area for over fifteen years. Her latest mural projects can be viewed throughout the city at Northeastern University’s campus, on the Charles River Esplanade, in Brookline, Allston, the North End, Downtown Boston, and Central Square, Cambridge. She continues her studio art and design practice at the Boston Center for the Arts in the South End. 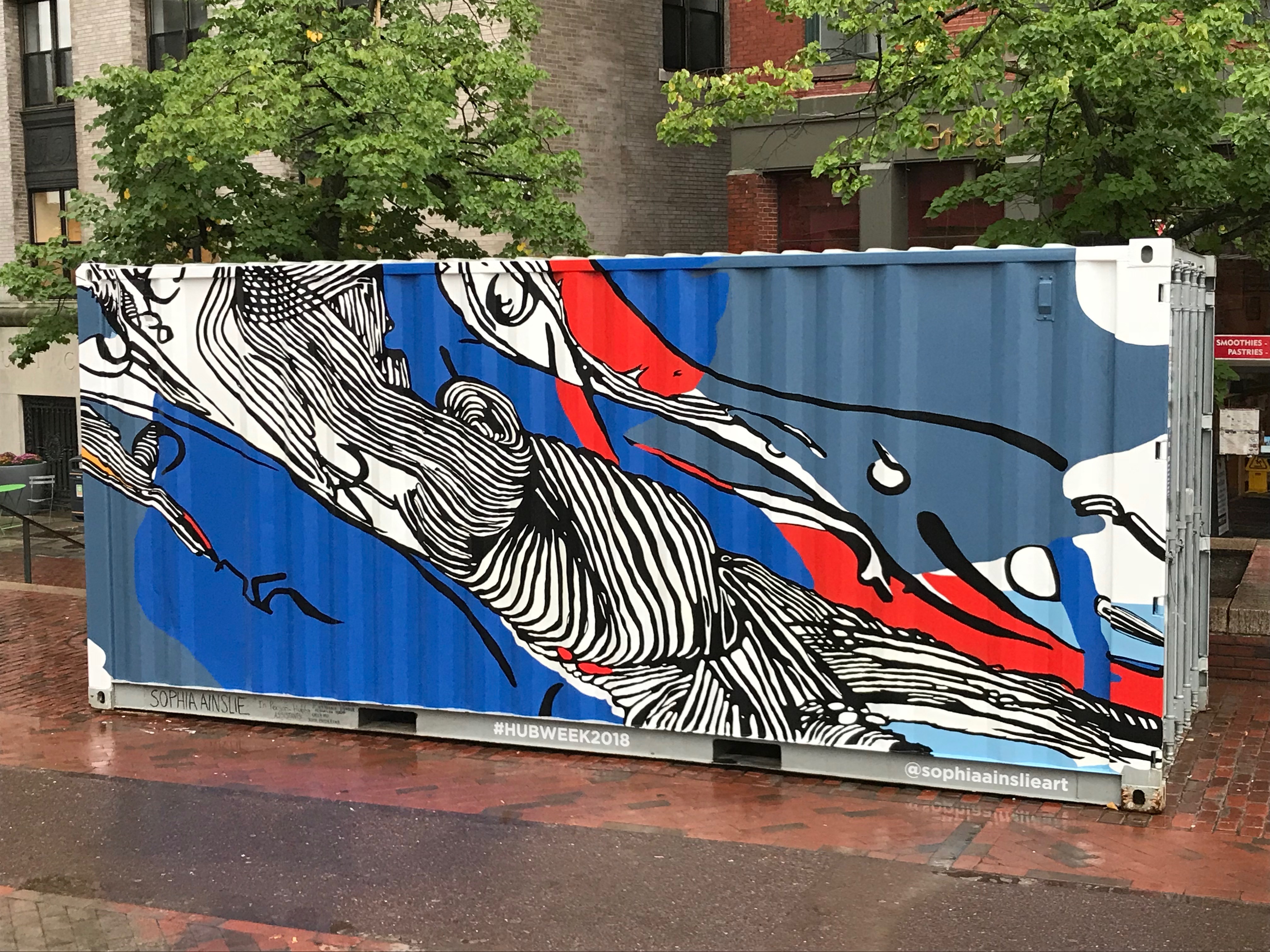 Sophia Ainslie is a South African abstract painter whose work exists somewhere between drawing and painting. She transforms her observations of the world around her into her own abstract visual language that celebrates color, relationships, movement, and space. Her imagery focuses on the connection between diagnostic imaging technologies and landscape, interior and exterior, and the microscopic and macroscopic.

She melds observation with imagination, resulting in a relationship of connections and disconnections between black mark-making and flat color, stillness of shape and active mark, movement and space. Actively pushing the formal aspects present in the work, she is interested in making the negative shapes prominent — creating spaces/places that look like something was once there, but is no longer. Ainslie holds a teaching position at Northeastern University, maintains a studio in Somerville, and is represented by Gallery Naga, Boston. 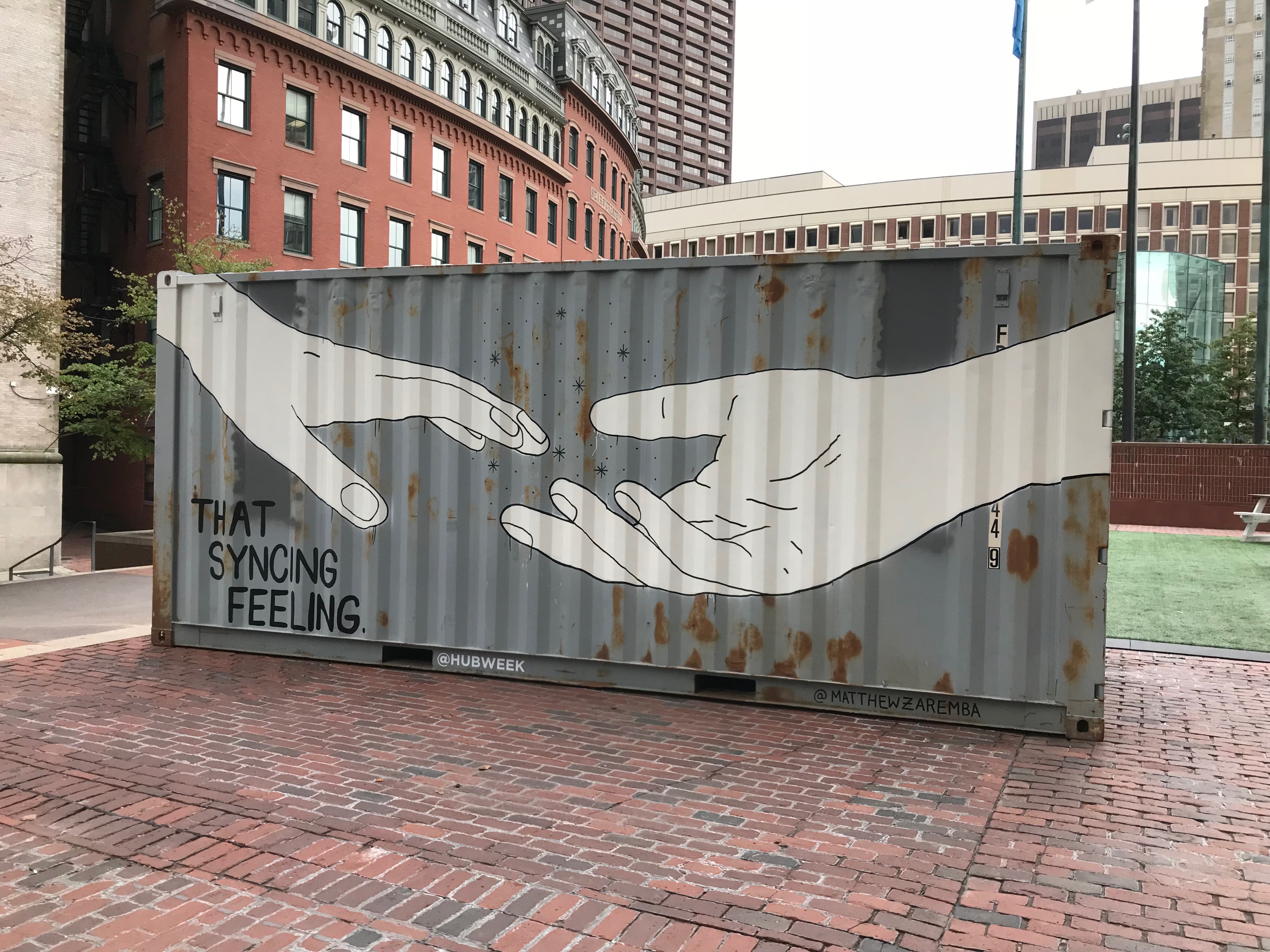 Zaremba’s work examines the human condition, as well as the intricacies and idiosyncrasies of relationships, communication, and the mind. Through the inventive use of humor, a minimalist aesthetic, and and graphic illustrative style, his work provides a poignant commentary on contemporary life. In the form of an introspective metaphor, That Syncing Feeling serves as a reminder of the power of the human connection in an increasingly digital world.

Zaremba: “We live in a time where we all increasingly get our sense of validation from social media followings and press hits, so I’m always balancing that awareness with the fact that I could care less. When you’re making art based on your reality, there’s really no plan b. I’m going to continue creating pieces whether thousands of people see them or only a handful.” Matthew Zaremba is a published visual artist whose work has been exhibited across the United States and abroad. 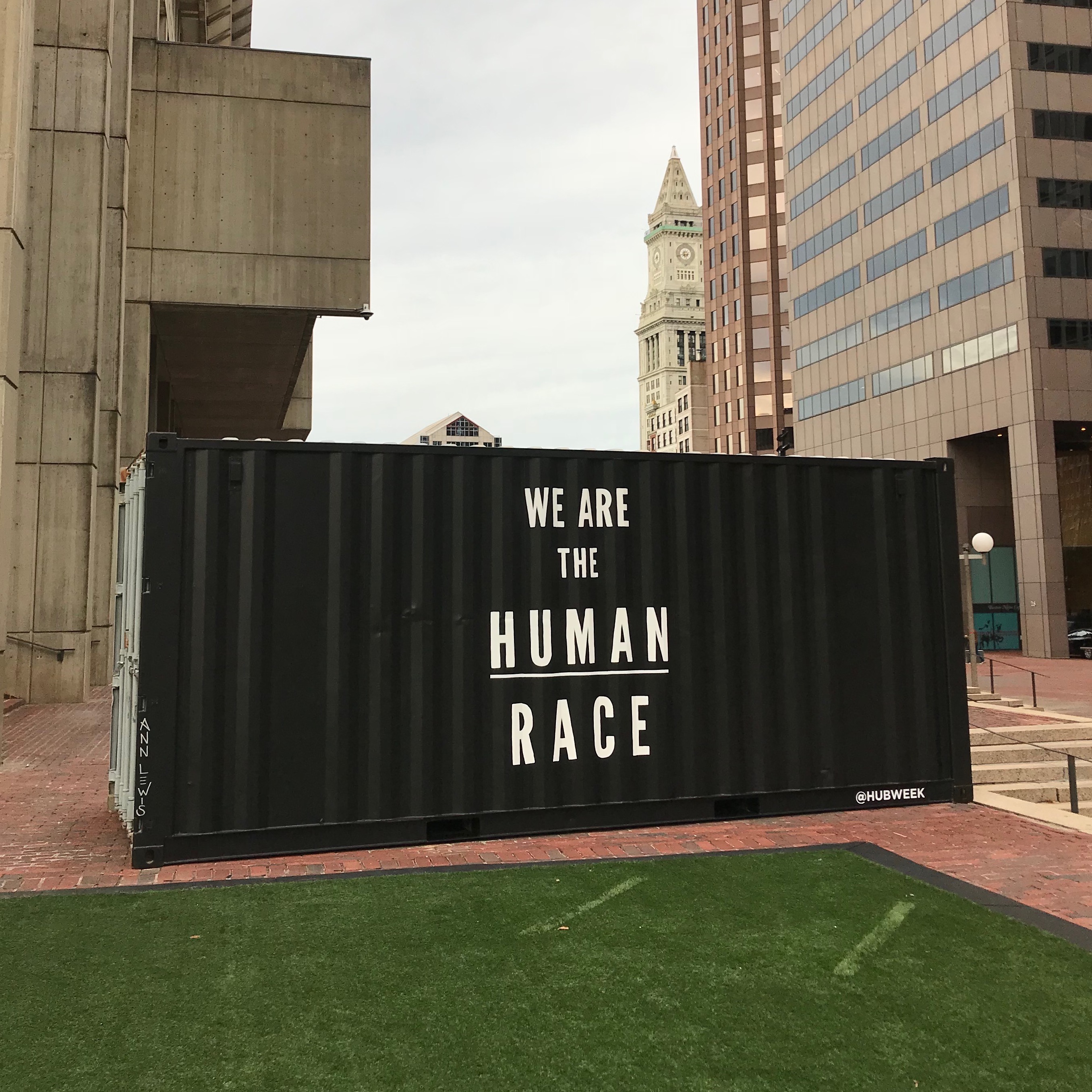 A Post-Colorblind America is a mural referencing the I AM A MAN protest poster of the 1968 Memphis Sanitation Strike. The work was originally created for the ACT ART NOW show coordinated by and shown at the Obama White House in 2015. This edition of the work invites people to participate in the discussion of racism and humanity in 2018 by adding their signatures to the mural if they commit to unequivocally understanding that all humans are their equals, and thus acting accordingly. If you agree with Lewis that we are the human race, please add your name to the mural using the provided marker. 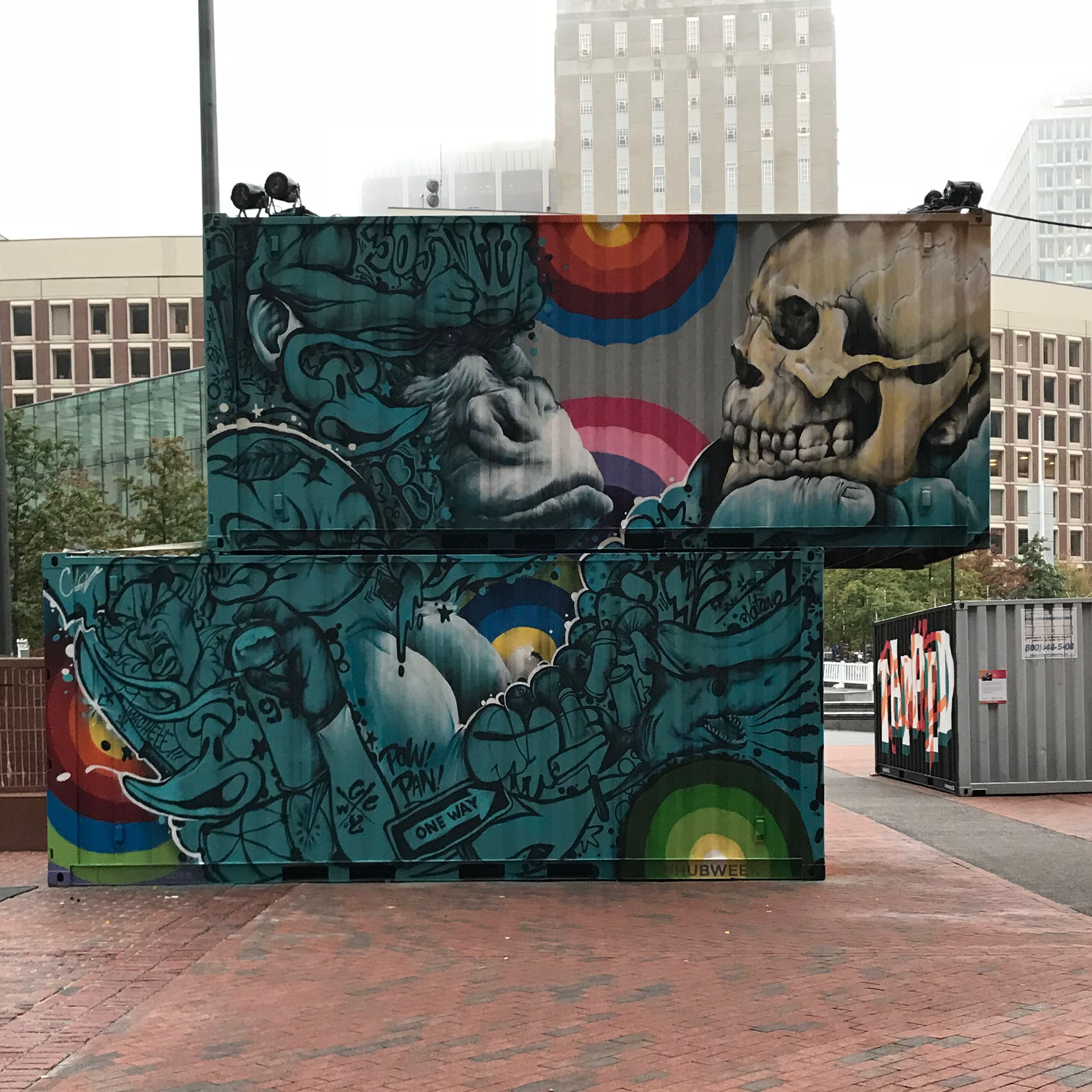 Ruben Gerardo Ubiera Gonzalez is a Dominican neo-figurative artist, known for his use of strong lines, graffiti inspired techniques/esthetics, urban murals, and mixed-media pieces and installations, all created with reclaimed objects and found artifacts. He paints and draws in a style called Postgraffism, but he prefers to call it urban-pop, since he has lived most of his life in urban, populated areas and most of his inspiration is derived from the interactivity of people and their urban environments.

Ubiera strives in all his works to capture an essential part of his past, his present, and his subjects through the use of the line and form. His work includes still-life and situational portraiture, but he tends to primarily focus on depicting his immediate urban surroundings and everyday complex human emotions using a strong and expressive line and vivid graphic color contrast, all while adding a mix of youth angst and detailed complexity. 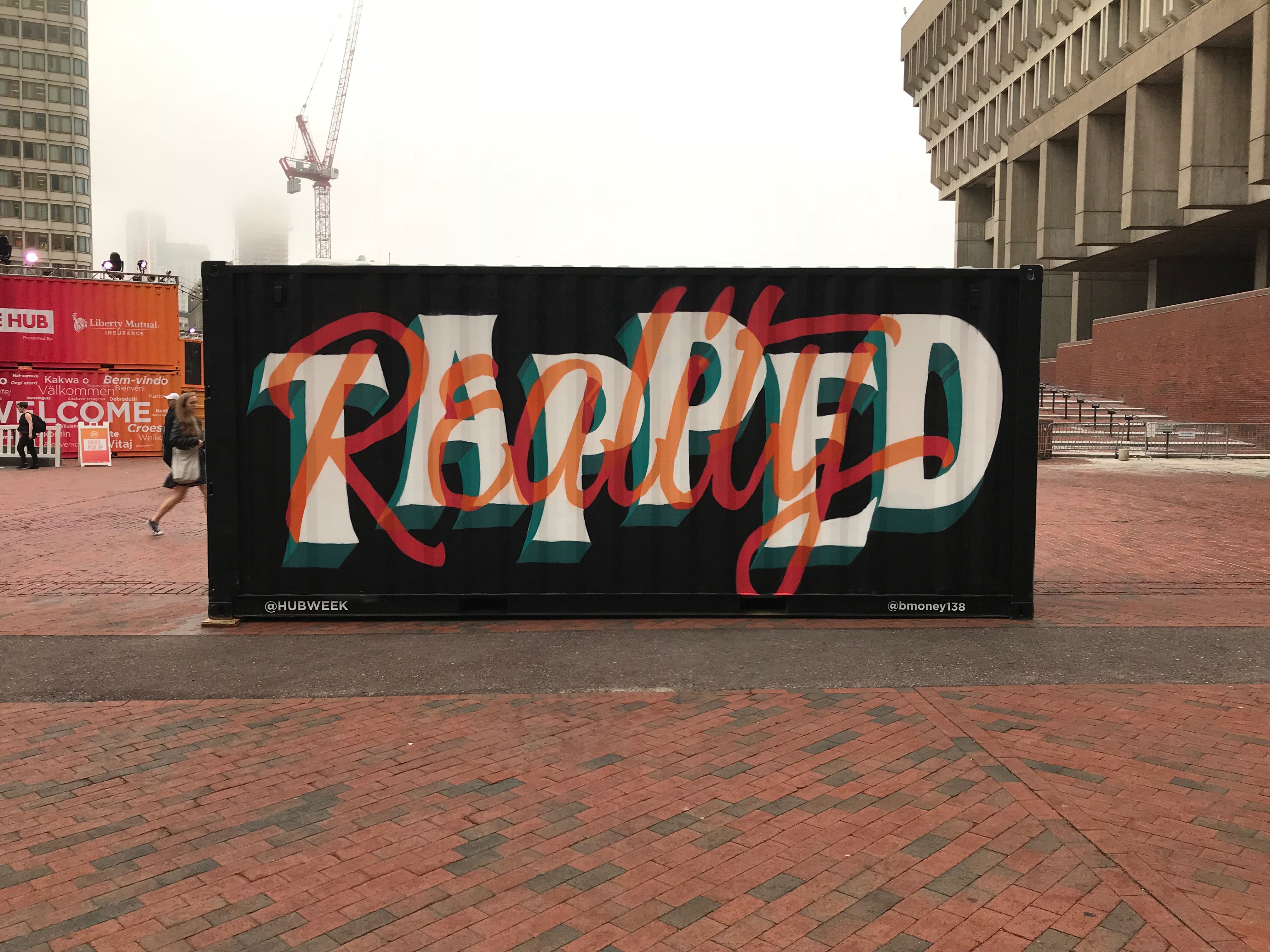 Tapped Reality addresses how our constant and expected access to the internet and television allows us to tap into new ideas -- including ideas that confirm and validate our existing sense of reality, for better or worse. The wall explores how access to this constant source of self-affirming data hardens our perspectives.

Denahy explores typography as public art as his work varies in scale from large typographic murals to smaller commercial signs, all of which remain focused on using typography to tell a story. In a time where the visual landscape is dominated by mundane, cookie-cutter, perfectly precise computer generated fonts and images, Denahy’s work brings thoughtful, creative, handcrafted letterforms back into the public sphere.

IMAGINE is a Nepali artist, educator, and social entrepreneur who paints mindful mantras in her native language, meshing the aesthetics of Sanskrit scriptures with graffiti influences. Being the first to bring together Nepali alphabets with American graffiti, she has shown her work in several exhibitions and has been commissioned to create murals and public walls around the world.

Shrestha graduated from the Harvard Graduate School of Education with a Master’s degree in Education, where she explored the intersections of creativity, learning, and technology. Currently, she is one of the City of Boston’s Artists in Residence. 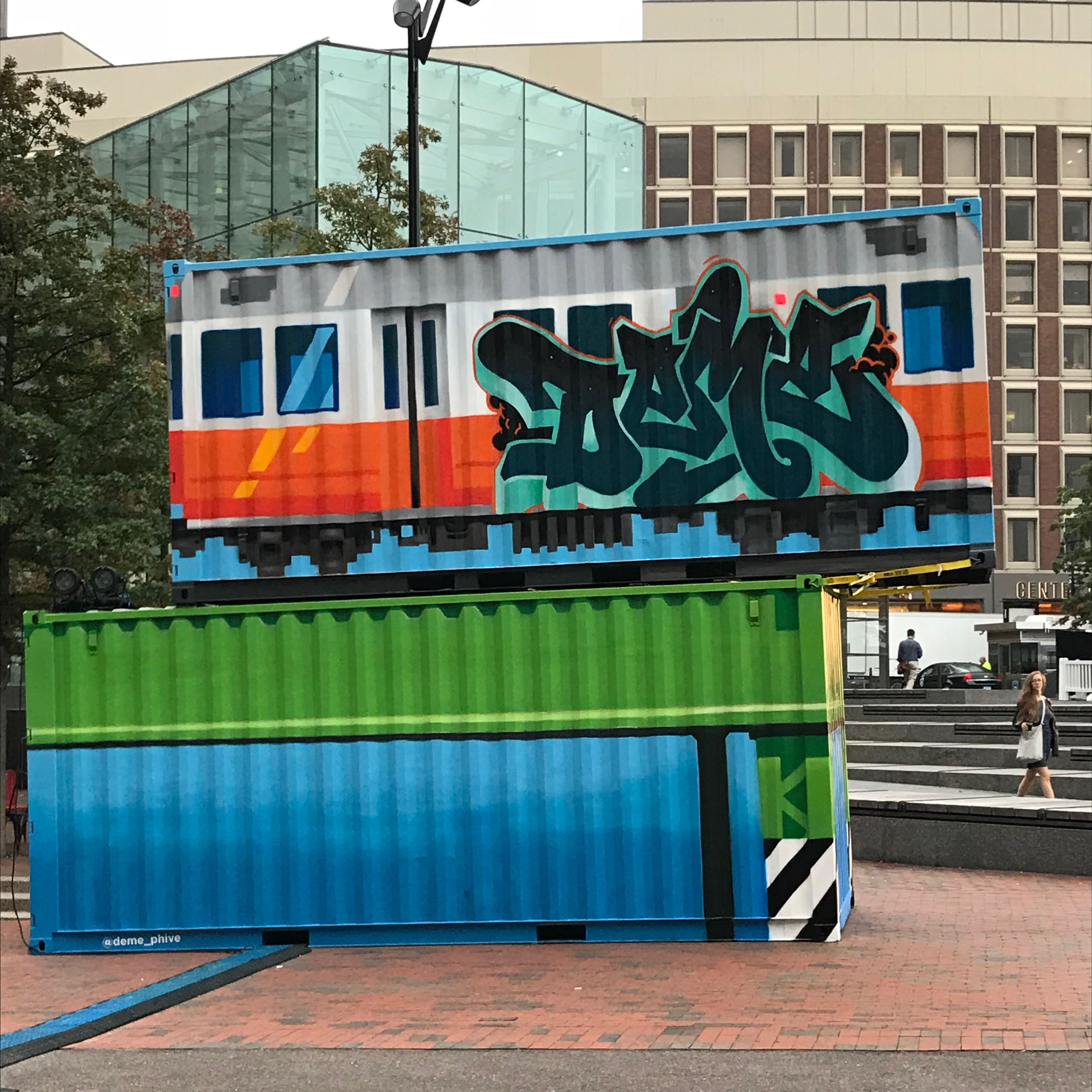 Driven by the sounds of hip-hop and his hometown of Boston, Deme5 is best known for his ability to wield a spray can as if it is a paintbrush. A graffiti artist at heart, Deme’s goal has always been able to show what is possible with aerosol. Using neither projectors nor grids, he’ll transpose a 5"x7" concept to a 100' wall simply with skillful eyes. His work is sought after by established businesses and inventive entrepreneurs alike. 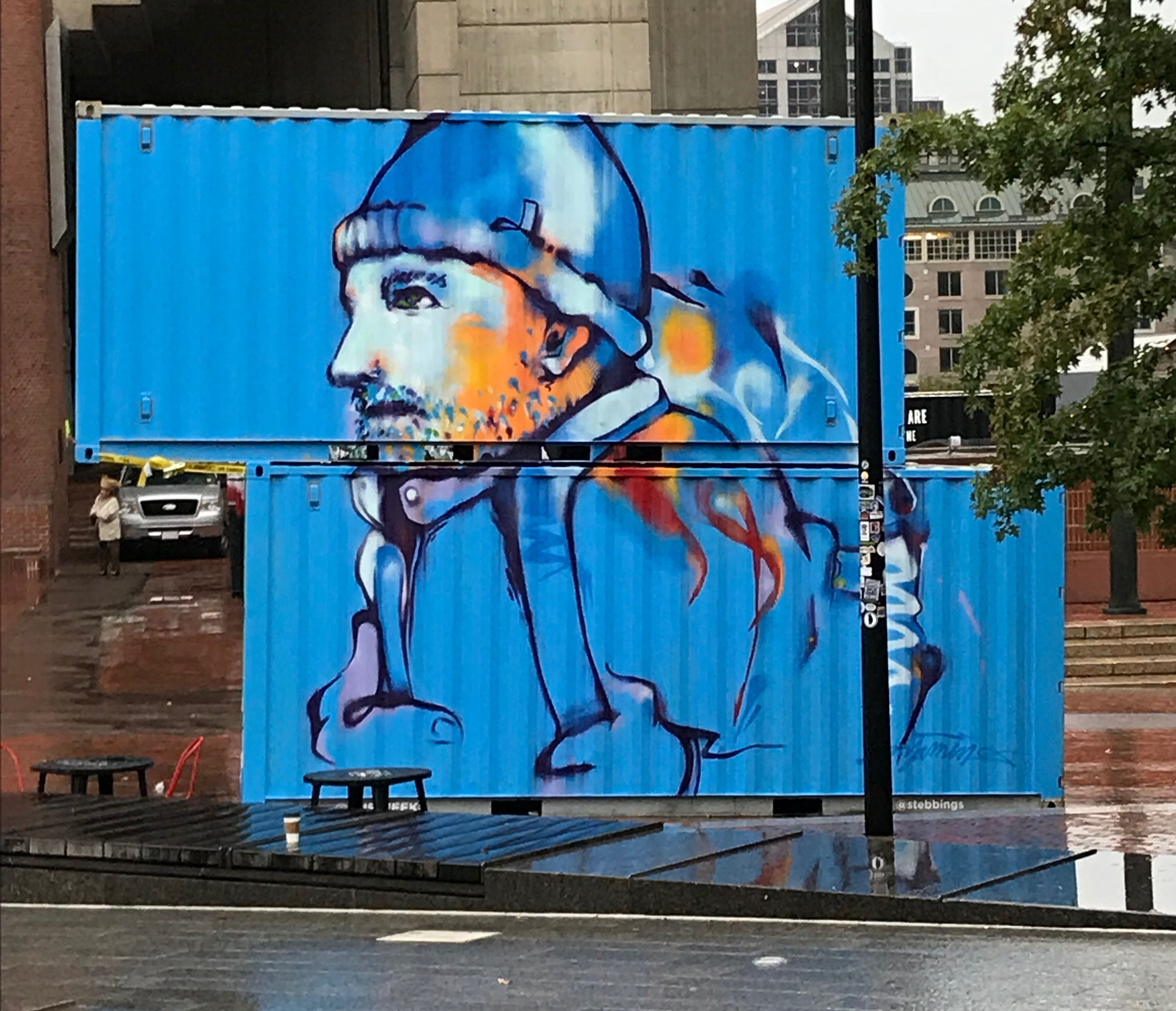 Stebbings studied at the Art Institute of Boston and Montserrat College of Art graduating with a BFA in Fine Art with a concentration in painting. The piece references the artist's personal love of travel but also speaks to the larger message of  the importance of going places, outside of your comfort zone, to meet people and see places that are different from you in order to come to a more open minded understanding of the world we share. 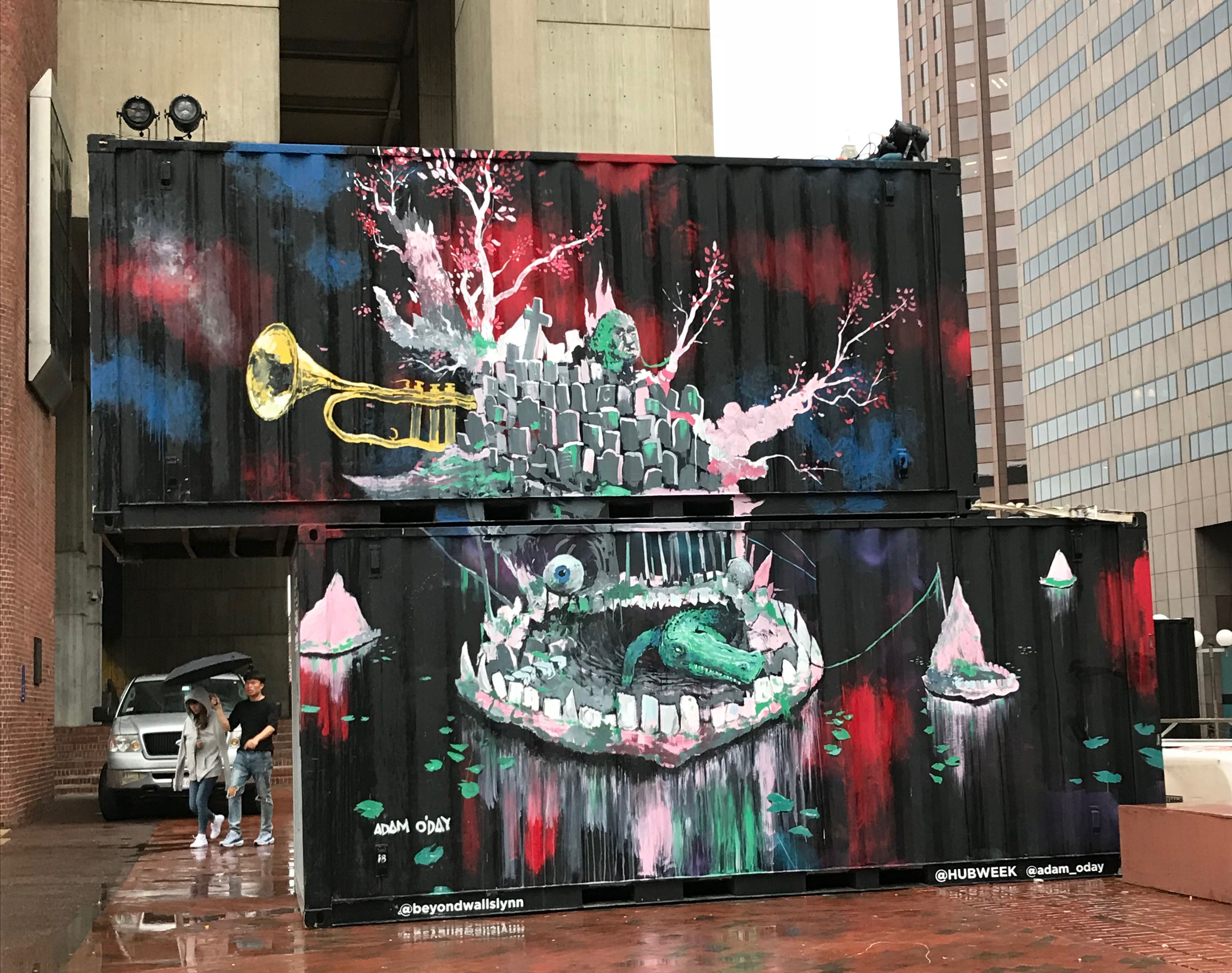 Known for his epic Boston based city scapes, O’Day’s mural is painted by hand with traditional tools such as the brush and roller.